Dr. Hazman Hazumi, Founder and CEO
In today’s modern construction space, Building Information Modeling (BIM) is the buzz de jour among stakeholders for its application benefits. However, as always, the migration from the traditional ways of going about with construction projects to building information modeling compliance still is a cumbersome task. A significant factor for this challenge to yet exist is ‘competency’ or rather the ‘incompetence’ of the service providers or consultants.

When it comes to heritage assets, they have always been managed using conventional methods. Movable artifacts were stored without proper documentation, making them almost inaccessible for research and hidden from public knowledge. Immovable assets such as historic buildings and monuments were ‘restored’ by contractors using conventional repair methods and managed by consultants who had none or very little conservation knowledge. The uncertain hidden initial capital cost and maintenance cost for the services, while updating and maintaining data in a project also is a cause of concern.

One firm from Kuala Lumpur, Malaysia, has decided to change the ball game altogether, Global Heritage Consultancy (GHC). The research and consultancy company focuses on Islamic heritage in art/architecture, education, and culture. It provides comprehensive BIM solutions throughout the supply chain of the AEC industry globally. The firm offers a-to-z bespoke BIM services and consultancy solutions intending to maintain the sovereignty of a nation’s built asset.

GHC was established with the belief that heritage belongs to the community. As such, it envisions on the protection of the cultural heritage of the people beyond its geographical borders using the most suitable technologies, hence the name ‘Global Heritage.’ It capitalizes on the advancement of internet technologies and the concept of ‘Global Village’ to stay connected and relevant.

GHC was founded with a vision that cultural heritage assets are core to national identity and hence must be safeguarded using the most suitable technology. Moreover, this can only be achieved through research, “as such GHC prides itself by being a research and consultancy company,” says Dr. Hazman Hazumi, Founder, CEO of Global Heritage Consultancy Sdn Bhd and a certified professional technologist in building and construction, registered with the Malaysian Board of Technologists (MBOT).

Based on years of research, GHC decided to employ 3D Terrestrial Laser Scanning (3DTLS) as the company’s methodology in providing solutions to the documentation issues in the construction field.
It began from academic research in 2004, when the founder won a silver medal at the national level for his research on the documentation of Kampung Laut Mosque, which was the oldest surviving wooden mosque in Malaysia using 3DTLS. The published study was a joint effort led by Dr. Hazumi and Dr. Harlina from the International Islamic University Malaysia. At that moment, they realized that if they could overcome the issue of cost (employing 3DTLS incurs considerable cost to the institution/organization), the construction industry would be more cost-efficient as the 3DTLS produced reliable, auditable data that allowed stakeholders and industry players to coordinate their tasks, verify inaccuracies and as such cut unnecessary costs, which in turn brought to a speedy delivery of a project.

As such, when the government mandated BIM, GHC had already embarked upon delivering BIM solutions years ahead of the industry. Perhaps what makes GHC unique from its competitors today is the belief that 3DTLS and BIM form a comprehensive system in monitoring the efficiency of workflow in the construction industry, rather than just as a visualization application or software. For GHC, 3DTLS is a tool and a system that has benefited the company in terms of tracked record project deliveries, efficiencies in communicating with clients and stakeholders of a project.

GHC purely focuses on continuously upgrading its competency and training its team to provide its clients with affordable quality services. The company builds a long-term relationship and grows with its clients’ businesses. With every project that GHC successfully delivers, its level of competency increases, thus allowing the company to provide best practice services to its clients and consequently, it helps GHC to build a good business model that eventually benefits its clients and stakeholders. “We leverage on the long-term relationship with our clients to innovate solutions and create the opportunity to continue the sustainability of our business,” adds Dr. Hazumi.

Stepping into the Future

Recent developments in government policies and public sector active involvement and contribution to the emergence of IoT and ICT development have impacted building information modeling space tremendously, especially in a project construction delivery. Today trending information and data can be shared instantly, unlike five or ten years ago, and data availabilities are no longer an issue. Accordingly, GHC is shifting its focus towards data security and cybersecurity, data quality, managing the data, and how to responsibly share the data. 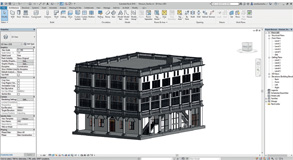 GHC aims to evolve to become the leading company in the AEC industry, delivering high impact projects, as well as providing sustainable solutions on maintaining the nation’s built asset. As the Malaysian government has also mandated the implementation of BIM in government procurement policy and high impact asset management, “GHC foresees no obstacles that it cannot tackle, we just need to take one step at a time to reach to the top,” adds Dr. Hazumi. As a growing company, GHC has built strategies to maintain its competency and will continue investing in its team training and credentials.

The recent benchmark project that GHC is working on is the Hikmah Exchange, Kuching Sarawak. This project, once completed, promises to be the first smart building in Kuching, Sarawak, which will be another significant milestone for GHC in paving the company’s future to become one of the major players in providing quality BIM and 3DTLS services in the AEC industries.

“I believe GHC will always be in the mainstream as long as we continuously focus on research and development. As a professional technologist myself, part of the job scope is to introduce the technological approach in the building and construction industries. The new benchmark in the industries is to provide competence and efficiency in the entire building and construction supply chain towards more sustainable development of the nation. Thus, GHC is ever ready to embrace any technological upgrades, which are defined as modernization,” concludes Dr. Hazumi.

Description
GHC – (Global Heritage Consultancy Sdn Bhd) is a research and consultancy company that focuses on Islamic Heritage in Art, Architecture, Education and Culture. Established in 2012, GHC specializes in conservation, digital heritage and heritage management for the purpose of present and future cultural and architectural preservation. The company is a pioneer in venturing the 3D high definition scanning system in the fields of arts and architectural. GHC has become one of the major players in providing quality BIM and 3DTLS services in the AEC industries 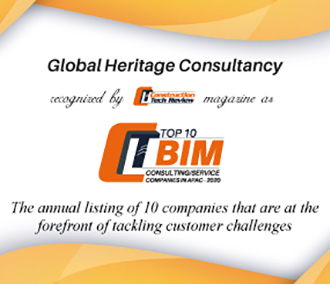 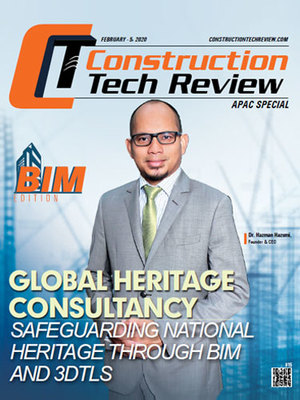 "GHC prides itself by being a research and consultancy company"

2020 All Rights Reserved | by: constructiontechreview
Top
This content is copyright protected